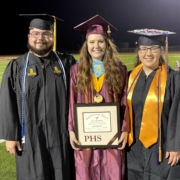 High school and college graduations are a time of celebration. A time to reflect on the years of hard work leading up to the moment when the next chapter of life begins. For three siblings, John, Mary and Edna, their recent high school and college graduations held a deep meaning as they paused to recognize how far they had come through their formal education and personal lives. If you would have asked them seven years ago if this moment would ever be a reality, they would have told you no. But in June 2014, God moved them to STCH Ministries Homes for Children, and their lives were forever changed.

Edna was 12 when she and her two older siblings moved to Boothe Campus. Child Protective Services (CPS) removed them from their family in 2014 and placed them under Permanent Managing Conservatorship which meant they were to remain in the state’s care. CPS placed them at STCH Ministries Homes for Children, and even though they were not all in the same cottage, they stayed together as a family. Edna recalled what it meant to stay together, saying, “It was a comfort. We were going through it together. We were experiencing everything together, and we could bounce ideas off of each other. It was good to have each other and to have that continued relationship with them.”

Mary arrived at Youker Cottage the day before her 15th birthday. When initially placed, the campus did not have room for the sisters to be housed together, but a week later, they moved in together at Barnes Cottage. The girls grew close to their houseparents quickly and attribute their success to the support they received. John came in a month before his 17th birthday and moved into Brown Cottage. He also created a deep relationship with his houseparents and still relies heavily on their support.

Prior to coming to Boothe Campus, the three siblings had not received any formal education. They had never set foot in a classroom, let alone a public-school classroom. They arrived on campus in the summer, so they were able to build relationships with some of the other children before going to school in the fall. Even with a foundation of friendship, the first day still shocked them. John entered school as a sophomore, but due to the fact he did not complete a freshman year he took double classes. He recalled his experience, sharing, “According to the state, I was considered a freshman, but the school put me in as a sophomore. I had a very weird high school schedule. I started out with English 3 then worked my way backward. English 3 one year, then 1 and 2 the next, then 4 my senior year. I also had both Algebra 1 and Geometry my first year.”

Mary started school as a freshman but struggled initially since she missed many of the academic building blocks in previous years. The school placed Edna in 6th grade, a year behind other students her age. From the start, all three siblings worked hard to prove that they could succeed. They attended tutoring in the mornings with Ms. Thiede, Ms. Staples and Ms. Custer. “If there was one day of the week that I didn’t go to Ms. Thiede’s, it was Monday mornings because we had the weekend to do homework. Other than that, we would go to her classroom, finish eating our breakfast, talk for a little bit and then work. She cared about our lives outside of the classroom, but she also pushed us. She would give us practice sheets and things to work on, and she would never say, even about simple math problems, ‘Oh you should know this.’ She was always very kind and would celebrate with us,” said Mary as she reminisced about her time in tutoring. All three siblings remain very thankful for the support they received from their teachers at Pettus Junior High and Pettus High School.

Over time, John and Mary’s hard work paid off. John completed school in three years and graduated salutatorian of his class. A year later, Mary graduated salutatorian of her class. Edna viewed her older siblings as role models and watched as they set the bar high. “Throughout my junior high years, I felt like I was in my siblings’ shadow; that I was not capable of reaching the same achievements they did. However, I just had to realize that I was writing my own story. I know now that it is not about the accomplishments, the awards or even the ranking but about how you make your story unique,” said Edna during her high school commencement address. Not only did Edna accept the challenge set forth by her siblings, she exceeded their academic successes and graduated valedictorian of the 2021 senior class at Pettus High School.

The three siblings’ stories do not end with high school though. Edna is excited to continue writing her story as she attends Hardin-Simmons University in the fall. Edna will study social work, and she plans to become a medical social worker. While living on Boothe Campus, her housepop became ill and needed continuous medical care. Edna sat back and watched as her housemom dealt with hospitals and doctors, and in turn, saw the value of a career as a medical social worker. “I think it would be really cool to connect people with the resources that they need. What locked it in for me was just seeing them work with everybody through his sickness,” Edna shared as she reflected on the recent season of life.

Mary graduated from the University of Mary Hardin-Baylor in May 2021 with a degree in social work. She attributes her time in CPS care to her desire to be a social worker. The siblings had three or four different CPS caseworkers throughout their time at Homes for Children as well as the caseworkers from STCH Ministries. Mary shared how this impacted her, saying, “You really saw a difference in the ones who really cared and really went the extra mile. That is so evident.” This fall she will continue her education by attending the University of Texas – Arlington to pursue her master’s in social work. “I want to help kids understand this doesn’t define you. Your story goes on, this is not the end of it,” Mary shared. Her desire is to see children succeed and realize they have a purpose in life no matter where their journey began.

John graduated with a degree in range and wildlife management from Texas A&M Kingsville in May 2021. He will continue his education in pursuit of a master’s degree in range and wildlife management. John found his passion for this field while living on Boothe Campus. Homes for Children takes the children on hunts every year, and in this setting, John met game wardens and biologists. John would ask them questions, and they would take the time to not only answer the questions but truly explain and educate him. “Ultimately that’s my dream job. Finding somewhere to be able to do that, to educate,” John shared. These experiences led him to where he is now, with the ability to give back and impact lives in the same way his life was impacted.

The three siblings’ faith also grew during their years at Boothe Campus. In her time with STCH Ministries, Edna learned many things from her houseparents, including how to walk with the Lord. “Papa would do our devotions and pray for us and pray with us. He was the one who talked to me when I wanted to give my life to God. He was the one that made sure I knew what I was doing and the value of the decision. He was the one who baptized me. I would have taken the long route to find God if they wouldn’t have shown me this is who He is. This is why we do what we do. This is why we love you. This is love. He is love,” Edna shared. Edna knew about church and God before coming to STCH Ministries but did not have the relationship with Him that she does now. She thanks her houseparents and other Homes for Children staff for their guidance throughout her time on campus.

John and Mary both felt like they had a strong relationship with God before coming to Homes for Children, but after attending church regularly with their houseparents and seeing the way their houseparents lived out their faith, they started to see things in a different light. These two siblings both left for college with a renewed sense of what it meant to follow Christ. They sought out churches where they could get involved and grow spiritually. “Part of it is me growing in my faith and walk with Christ, but the other is being able to love who I am in Christ now. This year is the first time that I could honestly say that I love myself as a person,” said John. They both lead in their churches and love the ability to help others grow in their walks. They attribute this desire to lead to houseparents and other staff on Boothe Campus who showed them what it means to truly follow Jesus.

“I know when I came to STCH Ministries I had this idea of myself that I was this person who was damaged goods and was someone who was so tainted that I couldn’t really truly move forward, and I no longer see myself as that,” explained Mary. “I don’t have to think of myself in that way anymore. To know that someone can say, ‘You can be more, and I believe that you are made to be more. You don’t have to stay where you’re at.’ That’s hope.”

John, Mary and Edna shared that without STCH Ministries they would not be where they are today. They would not have dreamed of college, let alone master’s programs. The siblings attribute a large part of their growth to the counselors, caseworkers, houseparents, Boothe Campus staff and teachers in the Pettus school district. Today, each of the siblings recognize the intrinsic value of their lives because of Christ and know that long before their first day at Homes for Children, they were made to be more.

Surviving to Thriving
Scroll to top