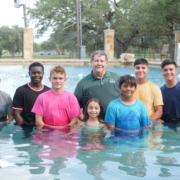 And Peter said to them, “Repent and be baptized every one of you in the name of Jesus Christ for the forgiveness of your sins, and you will receive the gift of the Holy Spirit. For the promise is for you and for your children and for all who are far off, everyone whom the Lord our God calls to himself.” Acts 2:38-39 ESV

July 9, 2020, was a day of celebration on the STCH Ministries Homes for Children campus. Six students from Boothe Campus and one student from a local church stood together and outwardly professed faith through baptism. These decisions came after years of support and prayers from their communities. Each student recognized what it meant to be baptized at Homes for Children in front of the people that continuously loved, supported and prayed for them. Here are their stories.

CHRISTOPHER’S STORY
Over the years, Christopher’s walk with Christ developed through church, Vacation Bible School, camp, Disciple Now and the leadership of his houseparents and others on the campus. The unconditional love his houseparents showed him and others in his cottage exemplified Christ’s love for Christopher. While attending Disciple Now 2020, Christopher made the decision to surrender his life and profess faith in God. He remembers the moment, saying, “I was shaking, and I just felt different.” A leader at the event helped him open his heart to Christ, and he felt a true, life change in that moment.

Christopher wanted to show everyone that his life had changed. The opportunity to be baptized on campus in front of friends and mentors was special to him. Since giving his life to Christ, Christopher feels different. Despite his young age, he knows that he can be an example to others. Christopher is working to become more respectful and caring toward those around him. He prays that he will continue to grow in his relationship with Jesus and be a leader within his community.

COLBY’S STORY
Colby’s walk with Christ began before coming to Boothe Campus. He attended church with his grandparents and loved listening to the pastor’s sermons. When Colby arrived at Homes for Children, he started growing closer to God and took steps toward deepening his relationship with God. He engaged in a weekly Bible study with one of the summer interns, learning verses that spoke directly to his current situation and experiences. Colby felt his faith maturing and decided to rededicate his life to Christ and follow through in baptism in front of friends and mentors who supported his journey.

As the summer progressed, Colby was ready to take this next step. He recalled his houseparents’ reaction to the decision, saying, “They were excited. They were proud of me because they knew I stepped over the line of faith with Christ.” The opportunity to be baptized in front of people who care about him made the occasion memorable. “God has a plan for me,” Colby emphasizes. Being surrounded by people that want to see him succeed helps Colby face the difficult days and makes the good days even better.

MOEMOE’S STORY
Recent graduate, Kimani (MoeMoe), grew in his understanding of the gospel while at summer camp with Homes for Children in 2019. During worship one evening, he became overwhelmed by the Holy Spirit and started crying. “I heard someone say, ‘I’m watching over you every day, all the time,’” MoeMoe remembers. His housedad approached and prayed with him. MoeMoe quickly turned around, and they embraced in a hug. In that moment, he was not fully ready to surrender his life to Christ, but God continued to work on his heart.

The following year, MoeMoe continued in conversation with the adults at Boothe Campus about Christianity. He attended Bible studies and built a foundation to fully open his heart to God. At the end of the 2020 school year, he fully surrendered his life to Christ and prayed to become a Christian. He wanted to make an outward declaration of the internal decision and asked to be baptized. MoeMoe shares, “Everybody at STCH Ministries played a big part in my life leading me to Christ. It meant everything for me to be baptized here.” He knows that as he moves forward, the decision he made to accept Christ will change his life for the better.

JOSH’S STORY
Josh lived at Boothe Campus until he graduated in 2018. Before coming to STCH Ministries, some of his friends invited him to church, and he started attending the youth group. At this point in his life, Josh had never heard the gospel. Attending church became something that Josh looked forward to, and he started to learn what it meant to be a Christian. One night at a special worship service, he prayed to accept Jesus into his heart. A few months later, Josh and his siblings moved to Boothe Campus. “That’s when my relationship with Christ really started to grow. Here you have all these leaders that genuinely want you to have a relationship with Christ and want you to grow in your faith,” Josh recalls. During the three years he lived at Homes for Children, his relationship with Christ evolved.

Josh is now a leader within the Baptist Student Ministry at college, and he works to help others grow in their faith. During the summers, he either works at Camp Zephyr, a Baptist encampment, or stays at Boothe Campus to mentor children. When Josh heard about the baptisms on campus, he felt called to take the next step in his faith. “STCH Ministries is basically home for me, so growing in my faith and walk with Christ just made it complete to be baptized there as well,” Josh said. He looks forward to helping others in their spiritual walks just like so many did for him.

C.J.’S STORY
C.J., another STCH Ministries alumni, believes he would not have found God without the relationships he built while living at Boothe Campus. When C.J. first arrived at Homes for Children, he struggled to navigate the complexities of his life. He rejected God and did not feel like he needed a Savior. As the weeks progressed, C.J. opened up to those around him and encountered Christ. Deray, another student on the campus, talked with C.J. about the Christian life. One night, Deray asked what was holding him back, and C.J. shared that he did not know how to become a Christian. In that moment, Deray led him in the prayer to surrender his life to Christ, and C.J.’s life changed forever. “It was so beautiful. It was gorgeous, and I have to give it all to God. God gave Deray the strength and courage to help guide me through the prayer,” C.J. shares.

After giving his life to Christ, C.J.’s life changed for the better, gaining hope to face each day. He knows that even when he messes up, God forgives him. “He says that ‘I am here for you.’ That’s the most beautiful thing that God has ever done for us,” C.J. exclaims. C.J. wanted to share his decision with others to demonstrate how far he had come. He was ready to get baptized and knew the best place to experience this was at Boothe Campus. In front of his friends and family, he shared his love for Christ and truly surrendered it all. Following the transformation in his own life, he decided to share his newfound hope and joy with his younger brother, Ian. Little did he know the impact it would have.

IAN’S STORY
Much like his brother, Ian never thought he needed God. When they first arrived at Boothe Campus, he made fun of the children who believed. He wanted to do life on his own. When given the choice, Ian decided to move back home with his family instead of staying at Homes for Children. He thought his life would be better there. As his happiness slipped away, he became angry. This is when he decided to move back to Boothe Campus. Before leaving for Boothe Campus, C.J. talked to him about how God changed his life. Ian listened and realized that he needed Jesus.

After being back on the campus for a few months, Ian decided to talk to some of the housedads about a relationship with Christ. He looked forward to going to church and learning more about becoming a Christian. One day, he approached a housedad about giving his life to Christ. The housedad led him in the prayer to accept Jesus into his heart. Ian wanted to get baptized right away at Boothe Campus and share his decision with those around him. Knowing that his brother was going to be baptized at the same time made the moment even better. “As I prayed the prayer, I felt this cold breeze, and my body just lit up. When I was baptized, I felt the same thing. It was amazing,” Ian said.

While each story can stand alone as a distinct and unique experience, the through-line is the involvement of a mentor. Mentors walk alongside students and discuss what it means to fully surrender their lives – the initial prayer through the outward profession. STCH Ministries is thankful for the houseparents, interns, staff, other children and local pastors that feed into the lives of the students at Boothe Campus. Ultimately, we give all the glory to God for working in the lives of the children that we serve. We know that His plans are greater, and we pray for each of these students as they continue to walk with the Lord.

One Step at a Time
Scroll to top