STCHM Print Edition Vol. 68, Issue 3 One Step at a Time 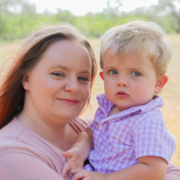 Stephanie’s journey toward a secure relationship with her son allowed her to ultimately experience the joy of motherhood while bearing witness to many childhood milestones. This resulted from a direct partnership between STCH Ministries Homes for Children and Homes for Families. These two ministries frequently team up and step in to help mothers, children and families navigate complex situations. Both campuses work to provide a solid ground for residents to regroup, learn and launch into the next phase of life. While Stephanie’s story weaves a tapestry of God’s provision through difficult life circumstances, it began in unpredictability and crisis.

Stephanie was born with Mosaic Down Syndrome. She worked hard to graduate high school and become a Certified Nursing Assistant. Her first son was adopted after birth into a loving family, but when she found out she was pregnant again, she felt a deep calling to raise her son, Ezra.

After Ezra’s birth, Stephanie moved into her mother’s home with her infant. It was during this period of time that Child Protective Services (CPS) was called to the house following an incident. The situation was reviewed, and CPS determined that Ezra could remain in Stephanie’s care if they moved out together.

Recognizing she was at a pivotal crossroads that would define their future, Stephanie carefully considered her options. On one hand, she could allow Ezra to be adopted into the family where her first son resides. On the other, she could begin the arduous process of finding a new community and support system for herself and her son. Saying goodbye was difficult to even consider. She felt a calling to be physically present as Ezra’s mother and wanted him to grow through infancy, childhood and adolescence knowing her love each day. Stephanie preferred the thought of finding holistic support as one family unit. She was running out of time and lacked tangible resources. Waves of uncertainty and doubt were crashing within and finding reliable and immediate help seemed impossible.

The night before Ezra was scheduled to be taken into CPS custody, STCH Ministries was contacted. There were no current openings at Home for Families where both Stephanie and Ezra could seek refuge under the same roof. This was initially difficult to hear, but the team continued their pursuit of a solution. That night, Stephanie learned that the Homes for Children campus had a spot available for Ezra. “We made some phone calls and suddenly, everyone was involved,” said Theresa Klacman, Director of Homes for Families. “Boothe Campus really stepped up to go ahead and take Ezra the next morning.”

The plan was in place with only hours to spare. Ezra would move to Homes for Children with the intention of reuniting with his mother as soon as possible at Homes for Families. “From the beginning, the reunification of Ezra to his mom was the most important thing for us,” said Greg Huskey, Vice President of Homes for Children. Stephanie was at peace with this decision. She trusted the teams from both ministries and knew she had found people who were truly advocating on her behalf and in her best interest.

While Ezra was at Homes for Children, Stephanie had the opportunity to visit him on weekends while keeping an open channel of communication with his houseparents. In every interaction, she remained confident that his environment and care were loving and attentive. She received regular updates about his daily activities, growth and progress, including the day Ezra took his first steps. This was a bittersweet moment as a mother. “Ezra is my world,” Stephanie remarked. She was proud of her toddler for reaching this developmental breakthrough, but it was hard to not be physically present for the occasion. She didn’t want to miss any other firsts in Ezra’s life, and she distinctly remembers this moment as a catalyst for her continual pursuit of personal development.

A month passed, and Stephanie was notified that space was available at Homes for Families. “When I found out that I could be at Homes for Families and have him back, it made me so happy,” Stephanie recalled. The day after her arrival, Ezra joined his mother. It was an emotional reunion with her son, and she felt a sense of peace and excitement for their future. She was thrilled to return to the daily tasks of being a parent. “I have to be here, and I have to be the best I can be for Ezra,” said Stephanie.

While Stephanie remained thankful that she could stay with her son, their time spent at Homes for Families was not without struggle. There were moments where she missed her extended family and wanted to leave, but at the end of the day, Stephanie was grateful to have Ezra back in her arms. When asked about her current journey in motherhood, Stephanie said, “I cry myself to sleep, but it is happy tears, because I finally have my son back.” She envisions a bright future, raising her son while being there for the many “firsts” ahead – from the start of school, to achievements in activities and special holidays together.

Stephanie is vocal about her belief that she is exactly where God has called her to be. She sees His providence through every bump in the road, leading them to Homes for Children and Homes for Families. “I am happy to be here. It’s really helping me to grow and see more of God.” Stephanie continued, “After being here a month, I finally accepted what happened, and I believe everything that has happened has brought me here and given me a second chance at being a mom.”

When mothers ask for help, Homes for Children and Homes for Families work together with compassion and understanding to provide a place to call home. Stephanie does not shy away from noting that asking for help was scary. There were multiple unknowns and questions swirling in her mind. But the unique partnership between these two ministries prioritizes acknowledging these fears and standing in solidarity with families as they make difficult decisions together. Decisions that ultimately shine light into darkness and bring hope and joy that is only found in Christ.

Stephanie’s story illustrates the beauty that results when the entire team at STCH Ministries works together to ensure the best outcome for families. When Homes for Children and Homes for Families collaborate, everyone wins. Children find safety and love while physical and emotional needs are met, and mothers find support and resources during periods of transition. This is exactly what happened for Stephanie and Ezra, and it’s a recurring experience for many other families seeking care and shelter. Where there is uncertainty, peace finds its way. Where there is brokenness, the beauty of Christ’s love breaks through.

Homes for Children laid the foundation of stability and normalcy for Ezra while Stephanie took the necessary steps to process their brief separation. Because these campuses function as an extension of each other, the transition to Homes for Families was seamless. With combined efforts, both ministries provided a loving atmosphere grounded in Christian principles for this mother and son to build a stable and fulfilling life – one step at a time.

The Journey
Scroll to top