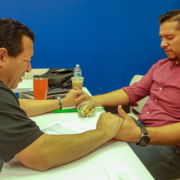 OVER THE COURSE of several Faith & Finances sessions, Blanca and Ivan developed a friendship. Ivan appreciated her kindness and sincere interest in him as a person. That sort of authenticity seemed out of the ordinary compared to many relationships he had experienced. The two shared a commitment to impacting people’s lives in a positive manner. In his role as coordinator for Healthy Living, Ivan taught classes on nutrition and holistic health practices. He often gave Blanca time in his classes to present the Faith & Work | Faith & Finances philosophy because he agreed that financial understanding played an important part in a healthy life. Although Blanca explained the Faith & Finances curriculum’s emphasis on Biblical principles about money as students learned practical skills, Ivan did not understand how the two ideas blended together. As he heard feedback from students who took the Faith & Finances classes, he appreciated the fact that the program helped the participants, “not just financially but emotionally. I realized they created a community culture inside the program,” Ivan said. He went on to explain that learning about the course gave him his first understanding that Christianity entailed more than Bible lessons. The idea that the Bible applied to him intrigued him.

As their professional friendship increased, Blanca encouraged Ivan to attend both the Faith & Finances as well as the Faith & Works courses. He never committed, giving the excuse, “I’m not in the right spot to do that right now.” Although he considered Blanca a close friend, he could not bring himself to change the habits of a lifetime and risk opening up to her. She knew he carried a heavy burden and reminded him that she would be happy to listen whenever he was ready to share his troubles with her.

The troubles Blanca sensed included the abrupt end of a longtime relationship as well as family troubles. Ivan’s father left the family when Ivan was a toddler. His single mom worked long hours leaving then five-year-old Ivan to care for himself and his younger sister. He described his childhood as non-existent as he dealt with abuse and repeated negative assumptions about his future. After a twenty-eight year absence, Ivan’s dad returned to his life and Ivan did not know how to handle the clumsy attempts to reconnect. As personal and professional pressures mounted, Ivan reached a breaking point.

“I worried, stressed out and was not able to sleep.
I became another person,” Ivan described.

Although friends and coworkers encouraged him to step out into new opportunities, his past weighed heavily on his mind. He started his career at the YMCA as a part-time employee and over time worked his way up to a full-time, leadership position. As that dream came to an end, he found he could not hope for anything better.

In November, Blanca set up a training session with Ivan’s training team at the YMCA to share a segment of the Faith & Finances curriculum about handling holiday finances. That day, Ivan met Tim. He first believed Tim to be intimidating and while Ivan contemplated leaving YMCA, he did not feel invested in talking about the future. As they talked after the session, Ivan surprised himself admitting that he needed help preparing his resume and looking for a new job. Tim’s response amazed Ivan. “You know what? I can help with your resume; even write a letter of recommendation for you.” The two agreed to meet the next day.

Tim read over the resume and challenged Ivan to highlight himself and his accomplishments rather than the organization he worked for. Tim gave useful pointers showing Ivan where and how to change the wording on the document. During their interview practice, Tim told Ivan, “You need to start selling yourself and you have to believe in yourself to do that.”

Ivan struggled to believe that someone who barely knew him could see potential in him. The negativity he had accepted from childhood kept him from recognizing his strengths. “My career suffered for it because I did not know how to separate my personal life and my work life even though they are two different things,” he explained. He felt as if his life lay wrecked at his feet and he did not know how to put it back together.

Tim recognized the desperation and anger Ivan felt. Tim got Ivan’s attention when he told him,

“I’m here to help you, to guide you. I want to help you
grow in different ways, as a leader and as a person.”

Tim went on to ask if Ivan would like to get rid of all the stress, burden and pain.

Ivan struggled to understand what Tim told him. “Hearing those words stopped my thoughts. I’ve never had someone who cares about me who will give me the tools I need to succeed in life.” It took several minutes for Ivan to process the fact he had found someone who truly loved him for himself. Two people, including Blanca, willing to put in their time and effort to help him become a better person.

Tim explained God’s love for Ivan, in spite of everything he has done. They searched the Scripture together reading about the redemption God provided through Jesus, His Son. After a while, Tim asked Ivan if he was ready to turn his life over to Christ. He immediately teared up and answered yes.

Ivan listened to the explanation that giving his life to God meant having someone to walk beside him and fight his battles for him. He explained,

“The worst thing I had done in my life was to
try to solve all my problems by myself. At that
moment, I knew I had to do something for myself
and let God walk with me. When I gave my life to
God, all I could think was, I need help.”

After he prayed, he looked up at Tim and said, “Wow! I feel so light! Is it supposed to feel this way!?”

The two men set weekly times to meet for an hour or two of discipleship and prayer. Together, they worked through the study, Experiencing God, by Henry Blackaby. ”I feel like prayer has been the biggest thing I have done in my life,” Ivan said. He learned that prayer is a conversation with God, the same as any conversation with anyone. That understanding changed his life.

Ivan still marvels at God’s love for him, sending a mentor who cared more about his personal life than career goals. Today, Ivan counts Tim as a true friend. He enjoys his new job teaching diabetes clinics and nutritional goals through a medical clinic. Because God brought Tim and Blanca into his life through Faith & Finances, Ivan believes he can connect with people to help them make real changes in their lives. “I know my life has a purpose now,” Ivan shares.

Through the Children’s Eyes

The Ministry Continues
Scroll to top