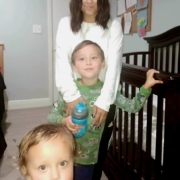 The Lord is truly working in our Homes for Families ministry! A young woman named Klavdia came to Homes for Families last month but left only a few days later. She was confused and emotionally tormented. The enemy was coming at her from all angles through the controlling and abusive relationship she had recently fled. She started to settle in at Homes for Families when she decided to leave. She was not gone very long before she realized that Homes for Families is where she needed to be even though the enemy was fighting for her to leave. Through many prayers, Godly counsel and unending support, she decided to return! Klavdia began to do her daily devotional and stayed in constant communication with her resident coordinator. She finally broke through the confusion and emotional torment she had been experiencing.

Since returning to Homes for Families she says she now feels safe. She discovered the things her abuser had used to hurt and shame her and started to move past them. She has also been able to find it in her heart to forgive her abuser as well as others who have hurt her in the past. She said, “Now I don’t have to worry about any of that in the past. I can focus on my Bible, the Lord and the future He has for me and my children!”

We are so thankful for the counselors, resident coordinators and other staff who provide endless support and open arms to mothers and their children. Please join us in praying for Klavdia and the other mothers and children on our Homes for Families campuses.

A Story of Hope