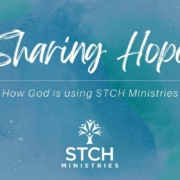 STCH Ministries Family Counseling exists to provide hope and direction for children, individuals and families. Our counselors walk hand and hand with people to help heal hearts with Christ at the center. Below is a story written by Leslee O’Neal, one of our counselors in Corpus Christi, about how unidentified grief can affect an individual.

Too often grief is looked at as despair and sadness coming on after the loss of someone we know and love. This grief can be extremely painful and can bring about emotions and behaviors that one never expects; such as anger, confusion, loneliness and fear. Far too often, grief coming from other losses is never looked at or identified as grief. I had a client come in about 3 years ago, his name was Daniel, and he was 47 years old. Daniel first reported that he was coming in because he was experiencing anxiety and had several panic attacks; which seemed to come from nowhere. As he shared his story in our first session together, I asked Daniel if he was experiencing any grief – he stated that his father died from a heart attack when Daniel was only 16, and his mother died 9 years later from complications related to cancer. Daniel was then 25. He stated that he assumed that he worked through the grief – and that so much time had passed that he didn’t feel as if he was still grieving the loss of his parents. However, the further Daniel explored his past it was clear that grief filtered throughout his entire lifespan.

Just to identify a few areas of grief, he said his father was an alcoholic and when he was intoxicated he was physically aggressive toward his mother. He stated that he, as a child, was never hurt, but struggled with the fact that he could never help his mother. Grief permeated Daniel’s years of development. He grieved his father’s behaviors and he lived in a state of constant fear of the unknown or the unexpected. He grieved the pain his mother experienced, emotionally and physically. He grieved that his environment and experience had to be secret. He grieved his total and complete helplessness; he couldn’t change his father and he couldn’t rescue his mother. The act of simply identifying the grief related to Daniel’s experiences as a child enabled him to begin the process of healing. It was going to take time but along with time came a deeper understanding, needed self-empathy and a stronger will to overcome generational curses that had been passed down through Daniel’s family line. This really is a story of healing. It also brings attention to unidentified grief. If grief is not identified it can cause trouble in many different areas, such as depression, anxiety and a variety of health issues. I encourage those who suspect they may have unidentified grief to seek help from a therapist or a pastor. Most importantly though, seek help from God, who tells us that he knows every individual hair on our head.

Never Giving Up
Scroll to top