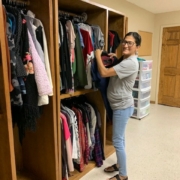 DEBBIE MOVED TO STCH Ministries Homes for Families in 2014 with her five children. Her children had been in and out of Child Protective Services (CPS) and moved between children’s homes, including Bluebonnet Youth Ranch and foster homes. Debbie wanted to find a place to go where she could learn how to leave the darkness of her past behind and gain custody of her children without worrying about CPS taking them away again. She did not realize at the time how difficult leaving her old life behind would be. Over time, she learned to lean on God and His strength and persevere even in difficult times. With support from her resident coordinators, counselors and case workers, God allowed her story to transform from one of brokenness to one of redemption and obedience.

The first time Debbie came to STCH Ministries Marshall Campus, she and her children stayed eight months. With hard work, Debbie was able to complete Phase I of the program, however, with Phase II she started hitting a wall. She chose to leave the program and return to relationships and situations that were not healthy. She wanted desperately to escape a life of darkness but was continually pulled back in. Debbie returned to the program in 2016, this time seven months pregnant with her sixth child. She wanted to make it this time, if not for herself, then for her children, but she hit the same wall in Phase II that she did the first time and decided to leave again. “I didn’t know how hurt and lost we were, and I kept hitting the same wall so we would leave and come back. I know the Lord was working through me and through the process to grow me,” Debbie shared.

Debbie returned in 2017, ready to make it through the program. She found Phase I to be more difficult this time. Debbie pushed forward and made it to Phase II. She did not want to give up and leave again this time because she knew what she needed to do for her kids.

In 2019, while in Phase II, Debbie worked hard and graduated from high school. She describes graduating as the most amazing time because she had the opportunity to go back to school and persevere with the Lord’s help. She was honored that her children were able to watch her go back and finish what she had started. She also received her driver’s license. After completing these two big steps, Debbie moved to Phase III and continued working on herself and her relationship with her children. She graduated from the program in April 2021 and she and her children were able to leave Marshall Campus.

Debbie’s children felt the strain of moving around as Debbie struggled with how to build a healthy parenting relationship with them. The STCH Ministries Homes for Families staff continued to check in with her even after she graduated. They worked to encourage her and support her. Debbie herself was doing well and thriving, but the place she felt she still needed to grow was in her parenting. In July 2021, STCH Ministries partnered with Bluebonnet Youth Ranch to open a Homes for Families campus on the Bluebonnet Campus. Some of the staff from Bluebonnet Youth Ranch applied to work with the new program opening up on the campus. Homes for Families Director Theresa Klackman saw this as an opportunity to help Debbie and her children.

In November 2021, Debbie and her children moved into Phase III on the Bluebonnet Campus. Debbie knew she was not where she needed to be as a mother and wanted to continue growing. Her children also needed a safe place to heal and grow from the wounds they had suffered over the years. Bluebonnet Campus was a familiar place for her older children, and they saw familiar faces when arriving on campus. The staff, including the counselor, activities coordinator and childcare provider, started working with the children to help their hearts heal. Debbie started working with the staff to learn how to better parent her children. The staff provided biblical words of wisdom that she had heard before, but for the first time, she really listened and put it into action.

Debbie’s relationship with her children has grown immeasurably since first coming to Homes for Families, and she gives all the glory to God. Her children’s relationships with Christ have also grown since moving to the Bluebonnet Campus. They enjoy going to their local church and having a church family that supports them no matter what they have been through. Recently Debbie’s oldest son was baptized at their church, and she could not be prouder. “Tears were just rolling down my face. It was an amazing holy moment as a mom to see my son who was heading down the wrong path as a teen giving his life to Jesus in an open public confession. Words could not even describe what I felt,” Debbie shared.

Despite all she has faced, Debbie now radiates joy. “Everything I went through made me who I am today. I am one of the blessed ones who get to be here and share my testimony about what Jesus did for me. This last time I came back, the Lord told me not to run. I was convinced I wasn’t going to run but then caught myself running from the hard things. But now I have the Lord to help me through the hard times so now I’m not going to run!” Recently Debbie applied for a part-time job with STCH Ministries as the commissary assistant on the Bluebonnet Campus. She is overjoyed to be able to work for STCH Ministries and be a part of the ministry that helped save her and her family from the darkness they were living in.

Debbie is forever thankful for the resident coordinators, counselors, case workers and other staff that have come alongside her and helped her become the mother and woman she is today. Most of all, she is thankful for God’s unending love in her life. Some of her best memories are conversations she had with her mentors on campus. Debbie sees a bright future for herself and wants to continue working for STCH Ministries mentoring other women in similar situations. Her advice to other women considering Homes for Families is, “just come with all your junk and all your brokenness. God will restore you!” Debbie faced the pull to return to her old life but she never gave up and now she is able to be a light for Christ in a dark world.

“I am the light of the world. Whoever follows me will never walk in darkness but will have the light of life.” John 8:12