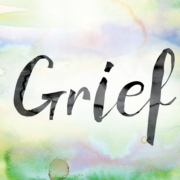 You would think that this title is an oxymoron, but I will explain this title as I go on with my story. Grief Share was introduced to me about two years ago. I had to participate in order to lead a group through the course. During that time, I was able to deal with some of my own unresolved grief. I had lost my Mom, my Dad, and then my brother-in-law that I had known since I was about eight years old. He became family when I was about eleven.

Going into this group I did not think that I had unresolved grief. I quickly discovered I could not deny my feelings. That group was the beginning of my grief journey. I didn’t start out my counseling career thinking I would focus on grief! As I sat there I thought to myself, more people need to be able to find the relief I did through this program.

Here are three stories from the Grief Share groups that I have led. This program has now served people from numerous communities in South Texas.

Doris joined Grief Share 14 days after her husband passed away from cancer. Doris was angry. Doris was very angry. The people in the group poured love into Doris every time she would lash out her anger at God, at the doctors, and at the hospital. Several told her that she may not be ready for Grief Share, but Doris insisted on staying and made every session. At the end of the Grief Share experience, Doris was mildly better and had her anger somewhat under control.

Doris came to the next round of Grief Share and during this time she was amazed that she did not remember seeing the videos or remember many of the discussions.  She was saved when she was young but had strayed from her relationship with Christ. Through Grief Share, her relationship grew deeper as Christ began healing. Doris was finally beginning to deal with the death of her husband. During this group she gave the testimony that if it weren’t for the previous Grief Share group she probably would have wrapped her car around a tree to end her misery. But, she wanted to come back to Grief Share and tell us that we were wrong and she was right in her anger! Doris admitted at the end of the second round of Grief Share that she was the one that was wrong and that she still needed help in dealing with her feelings of grief. She needed to learn how to move forward with her life, as she has a thriving business to continue to run and her only son had kept it afloat during this time.

Mona & Jenny are sister-in-laws who had both lost their husbands within a year of each other. One lost hers to a long illness, while the other discovered her husband in the fields where he was working, dead from a heart attack.

Mona was suffering from severe anxiety and could not drive without becoming hysterical. Jenny would drive her sister-in-law places and check on her, and then her own husband died unexpectedly, leaving the two women to depend on each other and God. The pastor of their church had heard about Grief Share in Beeville and suggested they contact FBC Beeville to find out about classes. They showed up during the 6th session and fit right into the group.

After a few weeks Jenny related a story about having trouble with her children and processing all the legal ends of the death. One day after a particularly arduous day, she was driving home and pulled over to the edge of the highway. She pulled a gun out of the glove compartment that she always kept there and sat for two hours contemplating using that gun. Jenny felt as though she lost her husband and now was losing the relationship with her daughter and life just felt too hard to live anymore. She remembered her dog that she got when her husband died to help keep guard of their place in the country and wondered who would take care of her dog. She placed the gun back in the glove compartment and continued home that evening. Jenny stated that Grief Share has shown her ways to deal with her feelings, shown her that there is still purpose in her life.  She is now active at her church.

Mona testified at the end of the 14th session that she was finally able to drive in the daytime and had begun volunteering to help keep her mind off of her problems. She continues to be active in her church as well.

Both ladies now feel that they are ready to face their lives without their husbands, knowing that God isn’t finished with them yet. They say they are still lonely but have dealt with the underlying anger of being left behind by their spouses.

Destiny came in on week 7 of the group. She had lost her mother nine months previously and her husband three months earlier. Destiny was feeling lost and lonely and was angry that she was alone. Destiny committed to Grief Share and opened up each time, sharing through tears of all the things that she was experiencing not having her husband to come home to every night. She talked through her feelings each week, with the other ladies sharing their similar feelings, and began her process of healing.

Destiny came to the celebration of Grief Share ending and stated that she had a story to tell us. She shared that before she came to Grief Share that she sat on the side of the bed one night with a gun in one hand and a bottle of pills in the other, trying to decide which was the best route to take to end her misery. Destiny was a dedicated Christian, and knew that this was not the right answer, but she was so lonely she couldn’t see going on any longer. She finally went to sleep and the next morning called the hospice group that had handled her husband’s case and they referred her to our Grief Share group. Little did any of us know that Destiny was that close to ending it all, and that our group was her last reach to God for help in her situation.

Destiny plans to return to our next session of Grief Share to continue her journey of healing.

* Names have been changed to maintain confidentiality.

I share these stories with you to tell you that I have learned two things:

1. Grief is every bit as life threatening as cancer and if left unresolved it can destroy a person.  Anger plays a huge part of grief.  Anger also destroys relationships.  Depression is also a part of grief and has a negative impact on the person who is grieving.

2.  Obeying God’s lead is so important.  When God plants that desire in your heart to do something, whether it is teaching a Sunday school class or volunteering for VBS or whatever the case may be, God has a plan and a purpose that is beyond your knowledge and following Him could save someone’s life.

The first time it was shared with me that one of these ladies almost chose death over life and gave credit to Grief Share and my leading the class, I took it with a grain of salt and thought it was coincidental. But God has always known that I require more confirmation than a one-time story.  He has allowed me to hear story after story.

Last night when I heard Destiny’s story, I shared it with my husband and I just broke into tears as he told me it was due to my obedience to Christ that these women are looking to me, trusting me, and listening to God again.  It was such a moving realization of the impact we have on people when we follow God’s lead and are obedient to His will.

Trust me, after working a full day in counseling and then adding three more hours in the evening, I have thought I’m not doing this again, but if you noticed, two of three of these cases came into group mid-way and needed to go through the course again.  Knowing that kept me going.

I feel so blessed by hearing, and finally believing after last night, that maybe I did make a difference in someone’s life today.  And that my friend is where I find that grief brings joy!