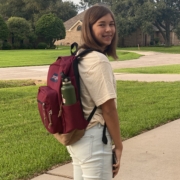 IN HIS BOOK, Crazy Love: Overwhelmed by a Relentless God, Francis Chan wrote, “But God doesn’t call us to be comfortable. He calls us to trust Him so completely that we are unafraid to put ourselves in situations where we will be in trouble if He doesn’t come through.” 14-year-old Reese felt God’s call to move from a place where she felt comfortable to a place of uncertainty and anxiety. She put her trust in God and with Him, her parents and STCH Ministries Family Counseling, she made it through and came out stronger on the other side.

While in 2nd grade, Reese’s family prepared to move from Katy to Fulshear in Texas. When she learned about the move, Reese started exhibiting behavior that caused concern for her parents. They sought help from school counselors and friends. They discovered the behavior she exhibited was caused by anxiety but did not understand how someone so young could experience anxiety in this way. Reese attended school in Fulshear for a few months after the move, but her mom felt the Lord stirring in her heart to homeschool Reese. Reese enjoyed the comfort of homeschooling, and it helped relieve some of her anxiety caused by social interaction. Her family attended church regularly and her mom, Alli, noticed the same behaviors resurfacing as she interacted with other students over the years.

Six years after she started homeschooling, Reese shared with her parents how she felt God calling her to attend public school again. They discussed it and decided she would attend public school for her 8th-grade year. Going back into public school created severe anxiety for Reese, “I went the first day and it went pretty good, but then afterward I kind of freaked out because I think it all hit me that it was so different. I didn’t want to go the next day because it was freaking me out so bad.” Her parents could see something was wrong so they were prompted to contact STCH Ministries Family Counseling in Houston.

In the first counseling session, Alli and her husband, Ronnie, met with Paris, who would be Reese’s counselor. They discussed the behavior they witnessed and Paris shared they were all signs of social anxiety and that many young children experience anxiety in this way. “As parents, we were like wow, that’s a real thing and we approached it differently. I felt so bad but the Lord is so gracious and we were able to talk to her and say that we didn’t realize that that was a real thing, but it was,” Alli shared. After receiving answers and making a game plan, the time came for Reese to start counseling. She recognized what she dealt with as social anxiety and prepared herself to begin learning more about coping with it and growing through it.

Even though she prepared herself, Reese experienced nerves going into counseling for the first time. Paris worked to ensure Reese felt comfortable talking to her and built trust with her in the early sessions. After building a strong basis of trust, they started doing role-play exercises. Paris helped Reese consider what other people may be thinking or feeling to help put her at ease. She taught her conversation starters and then practiced them with her. Reese took what she learned in counseling and put them into action at school.

Toward the end of the school year, Reese casually told her mom after school one day about a girl she had started to become friends with. The two girls even exchanged numbers so they could reconnect before school started in the fall. Alli held back tears as she looked back at the transformation Reese experienced from the beginning of the school year to that moment. Her daughter carried herself differently and showed a confidence she had never witnessed before. Reese started to feel better herself and looked forward to the summer.

Reese’s church decided to spend one week of their summer serving at STCH Ministries Homes for Children. She felt excited leading up to the week but also some anxiety about traveling to a new place and meeting new people. During their week on Boothe Campus, they hosted Vacation Bible School (VBS) for the younger children and games and other activities for the older children. For Reese, the interaction with the younger children came easy, but when it came to students her own age or older, the anxiety crept back in. Reese and her family started attending this church in November 2021 and the relationships she had already built helped her feel confident going into the week. She also thought back to the many counseling sessions with Paris as she prepared for the trip.

Once on campus, Reese’s anxiety started to lessen with the support of her friends. She led VBS worship on stage and started conversations with others on campus during their activities. Most importantly, she continued opening up to her friends from church. This huge step for Reese was made possible by prayer and counseling. Alli also attended the trip; she sat back and watched as her daughter acted as the hands and feet of Jesus. Alli knew a year ago, Reese would have never interacted with others this way. Her fear and anxiety would have hindered her from making friendships and spreading God’s love. Reese no longer let her anxiety define her. Coming home from the trip, she reflected on the change she saw within herself but knew more challenges stood ahead.

As summer came to an end, Reese prepared for her freshman year of high school. The night before the first day of school, the enemy used her anxiety to speak lies to her. Memories of last year started flooding her mind and she started to get discouraged. Her parents, armed with compassion thanks to their counseling sessions, began speaking truth over her. They assured her, “God is within you, you will not fall. With Him at your right hand, you will not be shaken. Be strong and courageous, He is with you wherever you go.” Armed with these words, she knew she could make it through her first day of high school.

During the summer, Reese connected with the friend she made at the end of her 8th-grade year. Having a friend made her feel a little more at ease about entering this new season of life. Alli shared, “she walked into 9th grade with confidence, not in her ability, but what He did, can, and will continue to do in and through her!” The coping techniques she learned through counseling helped her confidence. The challenges given to her by Paris allowed her to make new friends and see herself in a different light. Her parents’ new understanding empowered them to encourage her in the way she needed. God called Reese into a situation where she did not feel comfortable but He came through, gave her the tools to move forward, and allowed her to share her story for His glory through it all.

Created on Purpose for a Purpose