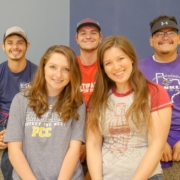 The summer intern program at Boothe Campus has been a major component of the activities calendar for over 40 years. Just before school lets out each year, three to five college students move to Boothe Campus for the purpose of becoming extra hands for Joel Bowden, Director of Student Ministries. The young adults remain on campus for 10 weeks, until just before classes are back in session again in August.

Joel began his career at STCH Ministries as a summer intern in 2012, serving three consecutive summers, and took on his current role once he graduated from Texas A&M University – Corpus Christi. Joel is responsible for planning all student activities as well as coordinating volunteers. He describes his job as “a combination children’s and youth pastor – for kids who are here 24/7.” Summertime brings many volunteers to Boothe Campus: church groups spend days or even a week at a time leading vacation Bible school, hosting sports camps, and carrying out work projects. With so many things happening on campus, having the interns as extra help is beneficial.

Being a summer intern is hard work. The hours are long but the schedule is flexible, and there are so many things to do that no one gets bored. The most important work of all is the spiritual investment they make in the lives of children. The interns are encouraged to seek out friendships with the children and even lead Bible studies.

But it’s not “all work and no play” for the interns. The opportunities for residents and interns are plentiful: horseback riding, swim days, game night at the gym, and “dive in” movies at the pool are just a few of the options.  Off-campus activities this year included Hooks baseball games, summer camp, and even a mission trip to the Dominican Republic.

The team of interns includes members from across Texas. Each year two summer missionaries from Go Now Missions, a ministry of Texas Baptists, join the team. This summer, Jaci Fulton from Telephone, Texas, and Israel (Izzy) Pereyra, from El Paso, Texas, felt called to STCH Ministries.

Izzy says that God has given him a heart for young people. “To see so many kids and youth who have been hit by life at such a young age, and be able to show them the love of a Heavenly Father, is an amazing opportunity.” What impacted him the most, he says, was “the love the kids show you…even though they have every reason to shut out the world.”

Some interns have a personal connection to STCH Ministries that keeps them coming back, such as parents who work at the children’s home.  Intern Mark Nauman is the son of houseparents at Marshall Cottage. Benjamin and Leah Brewer are the son and daughter of a staff member from the development office. All three have served as summer interns previously and were welcomed back eagerly by the children on campus.

Leah says that being an intern has been a wonderful experience, and these experiences are what keep her coming back. “Living on campus gives me the opportunity to actively disciple the kids, to truly model the character of Christ,” she says.

These committed young adults have now completed their summer-long marathon of ministry. But even though they have returned to their college studies, they have left countless memories in the hearts of children in care at Boothe Campus.

Better than Light and Safer than a Known Way