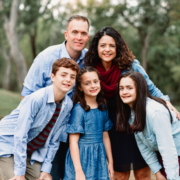 Chris Harriman believed he had the world when he married Rachel in 2000. The two met online in 1999 and discovered they shared similar upbringings. What they did not see coming was that Chris’s fear-driven compulsion to work as many hours as possible and Rachel’s codependent impulses to please the people important to her would drive a wedge between them.

After the couple married, they lived a simple life in a small apartment in Victoria, Texas. Rachel enjoyed being a wife and worked hard to establish a home. The year 2003 brought a medical crisis, a brain tumor Chris had received treatment for returned and required surgery. With Rachel by his side, Chris made a full recovery and their family soon grew by two girls and a boy. Determined to provide well for his household, Chris found a new job at a nearby chemical plant. Like many young families, the Harrimans enjoyed successes and faced struggles as they settled into a routine.

As the years passed, the two continued the business of daily life: work, church, friends, children, even occasional date nights. The connection between them faded and resentment found a foothold. Chris’s absences from family events and church activities pushed Rachel to depend on friendships at church for companionship. Chris grew to resent the time Rachel spent with her friends and she came to resent the impossible drive to keep everyone happy. Arguments and bitter silences replaced the affectionate atmosphere of a once happy home.

An exceptionally bitter argument over Rachel’s plan to go on a cruise with friends and Chris’s adamant refusal to allow her to, delivered the final blow to Rachel’s tolerance. Exhausted from a lifetime trying to please everyone and attempting to live up to the image of the perfect wife, mother and friend, Rachel could not fight anymore. She asked Chris to move out. Scared and furious, yet committed to his marriage, Chris refused. Rachel did not want a divorce either, but she felt they had reached an impasse.

A friend recommended STCH Ministries Family Counseling to Rachel. Chris reluctantly agreed to go along to sessions; he worried about his family’s and friends’ response to seeking outside help. The two met with Vince Porter, STCH Ministries Counselor, in the Victoria office.

In the beginning, Chris’s attendance was sporadic – work being his main excuse for not attending.  Rachel applied herself to the process and the truths she uncovered about herself. She grew up in a happy home, with four siblings and loving parents. She recognized having brothers with special needs made her family different from others, but she did not think about how that affected her outlook on life. As a young girl, she wanted to alleviate some of their struggles through not causing any more difficulties. Only after working with Vince did Rachel realize the coping skills she acquired as a child contributed to the problems she faced in her marriage.

Prior to therapy, Rachel had not heard the word codependency. Vince explained to her that it presented as an excessive emotional or psychological reliance on a partner; she recognized patterns in her own life. “I did not have a definition of who I was and what I liked and what I didn’t like. I thought it was rude to be direct or to have a decisive opinion about something.”

Rachel pieced together other aspects of her personality that led to the trouble in her relationship with Chris. While she often considered herself a victim of Chris’s overprotective nature, she understood that nature originally attracted her to him because it felt familiar.  She grew up in a home where the idea “father knows best” governed the family. Therapy allowed her to examine her childhood, identify patterns she saw modeled there and identify things needing change as an adult. Rachel learned the importance of assessing her likes, dislikes and setting boundaries. She attended a Celebrate Recovery group, as well as Codependents Anonymous meetings.  She found a sponsor who helped her to maintain the new margins she had created. As Rachel matured into the person that she believed God designed her to be, she found she did not want her marriage to end, yet worried Chris would not accept her changes. Encouraged by both Vince and her sponsor, Rachel prayed for Chris’s heart to soften.

Chris did notice the changes in his wife.  That combined with the tensions exposed in the sessions with Vince, amplified the underlying dread which colored his world. The meetings intensified his desire to save his marriage; he knew to do so would mean he must dig deeper into his own issues. He agreed to meet with Vince. Intense conversations and a commitment to change helped Chris identify the fear that plagued him. The perpetual question, “what if” controlled his thoughts. “What if the tumor comes back? What if I lose my job? What if…”

Chris made plans, organized situations and micromanaged every aspect of life. He nearly lost his marriage and family and saw how his behaviors contributed to the troubles they experienced. Vince’s challenge to seek what he would change in himself opened the door to honest examination. “In the beginning, I went because I didn’t want to lose something. I know now there was a purpose to it.”

Chris learned from a young age that hard work and financial security measured a man’s success. This idea took root and a dangerous experience at work increased the worry he carried. Vince helped Chris to acquire new thought patterns and gave him tools to combat the fear. Chris learned to let go of his fear and trust God to be in control.  One day at a time.

While accepting a difficult truth is the first step, both Chris and Rachel recognized that complete healing took time and continued effort. They each saw positive changes in the other and recognized the improvement God brought through counseling and commitment to their marriage vows. The couple now enjoys a deeper relationship, with openness and communication. Each confessed guilt and released shame that defined their lives before counseling, and both desired a closer relationship with God and one another.

Their new house, which is under construction, represents tangible evidence of the heart changes the couple experienced. A beautiful home on a country lot exemplified their dream come true for many years, yet, the “what ifs” kept them from taking the steps to turn dreams into reality. Chris gave God the glory for changing his heart; although the temptation to worry still exists, he chose to trust that God is faithful to complete the good works He began in those who love Him (Philippians 1:6).

Chris summed up their experience, “At first, I wished we hadn’t gone through that but now I see how it has made us who we are today. What the devil tried to make into a mess has helped us to become what God wanted us to be. I hope this is not just for us. I hope God uses it to encourage others.”

Fingerprints on the Future

Stronger Together
Scroll to top