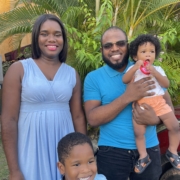 Ruth sat at the table in the two-room shack where she lived with her abusive husband and four hungry children. She stared at the cup of tea in her hand, hoping to abort the fifth child she was now carrying. “I was lost, my children were hungry, and I was desperate.”

UNICEF reported recently that across the world, about 1 billion children are multidimensionally poor, meaning they lack necessities as basic as nutrition or clean water, and 356 million children are living in extreme poverty. Estimates in the Dominican Republic report that more than one million children live in poverty. In addition to hunger, they often lack shelter, health care or proper sanitation and education opportunities.

The problem of hungry children is so immense that it tempts us to sing another hymn and get a little busier to ignore the sadness of this tragedy, or, guilt-stricken, we respond to a manipulative appeal for funding, aware at some level that whatever we give is at best only a band-aid. Torn between our Christian conscience and the incalculable reality of hungry children, do we give without an informed appraisal of the effectiveness or stewardship of our investment?

STCH Ministries (formerly known as South Texas Children’s Home) began meeting the needs of children and families in South Texas in 1952. In 2006, the ministry expanded internationally to meet the needs of children and families in the Dominican Republic. Their experience working with children in need had taught them that giving children hope and a future requires more than providing material needs for water, food and clothing.

The vision for a unique sponsorship program began in the hearts of a Dominican pastor’s wife and an elderly missionary. Recalling the Old Testament prophet, Franklin and his family
Samuel, who was called by God as a young child, they named it Samuel’s Fund. Under STCH Ministries leadership, this holistic child sponsorship program became the focus of their international ministry. In addition to strengthening families, the Samuel’s Fund program would intentionally prepare children to become Christian leaders in their churches as teachers, government employees, business owners or wherever God leads them. The priority would be education, discipleship, respect for caregivers and giving back to others. To accomplish those goals, shelter, hunger and other obstacles would be addressed as needed.

Samuel’s Fund sponsorship is unique in many respects. The current monthly donation is $35.00, five dollars goes to medical needs and the remaining $30.00 goes directly for the child’s benefit without any deduction for administrative expenses.

Every child is assigned a STCH Ministries caregiver who visits regularly to establish a personal relationship with the child and to support their families and teachers. A personal relationship with the child means that additional needs can also be addressed – tutoring, school supplies and uniforms, needs for shelter, food and medical care. Enrollment in a Christian school is encouraged to benefit from teacher to student ratio and to instill the principles of God’s Word. This wrap-around care often costs more than the$35.00 monthly sponsorship, and these additional expenses are covered through the general fund of STCH Ministries.

As Ruth sat alone, hopeless, surrounded by hungry children, she heard a voice, “Ruth, Ruth! I haven’t seen you recently. Come see me.” An elderly woman, Rosa Elena, had begun a school outside the village of Hatillo, mired in generational poverty and multiple levels of degradation and abuse. She passionately labored to rescue children through the Gospel and education. Samuel’s Fund sponsorships allowed her to feed, share the Gospel and educate Ruth’s children, along with many others.

Before she died, Rosa Elena passed on her vision to Ruth. Today, Ruth serves as the principal of that little school, while finishing her own education. STCH Ministries has stayed involved in many ways. Rebeca Dinzey, Samuel’s Fund Director, provides training and encouragement in the area of administration. A regular donation provides breakfast for the children. STCH Ministries partners, including Valentina and Diosmary, often fill in as teachers of English or physical education. Once a week, Valentina meets the older children for a Bible study after school. Regularly, Diosmary visits to help with budgets and accounting.

Ruth’s oldest daughter, Arianny, is in college. Her tuition is covered by the college scholarship sponsorship, CLEP (Christian Leadership Educational Program). Ruth frequently shares with visiting groups, “Today we are fed, today we have hope, and I am able to provide for my children. Many mothers in my area of Hatillo would like to join me today to share the difference that Samuel’s Fund sponsorship has made in their lives.”

Like Ruth, countless other children and families have been similarly impacted by the holistic features of the Samuel’s Fund sponsorship program. Today, they also give back to others. Franklin was the oldest son of an alcoholic abusive father. Sponsored for his education, his whole family accepted Christ and began to attend the IBQ church. Their falling-down home was repaired, beds were constructed by mission teams and frequently they received an offering of food. During his education process, he also helped with STCH Ministries computer issues and tutored other children, giving back what he had received. Today Franklin is married and the father of two children. He shares his faith at every opportunity in his work as a computer program designer for the Dominican customs department.

Jose Alberto was orphaned as a child, raised in the Kids Alive orphanage. Sponsored by the CLEP program, he will complete his dental education in December 2023. In the meantime, he gives back by educating younger Samuel’s Fund children, helping in the clinic and cleaning teeth. Others, like Naomi and Michelle, recently graduated and sponsored by the CLEP program, share a Bible study in Raquel’s school every week. Ricardo Giron, Haitian by birth, is now a leader with younger boys as he also studies through the CLEP program in the university. We are not always successful, as children age and make their own choices, but countless numbers of children have changed their future through a sponsorship that personally and intentionally invests to develop Christian leaders in their own culture for the future.

STCH Ministries President, Eron Green, often reminds, “It’s not about numbers, it’s about the weight of the impact.” We can feed 1000 children today, and 2000 tomorrow and 10,000 in a few years. Alternatively, we can invest personally in children living in poverty, support Christian schools, strengthen their family support system, introduce them to Christ and discipleship by a local church, tutor them, assign a caregiver to them, give them opportunities to discover and use God-given gifts to serve others. Through this, they can reproduce themselves through forming Christian families, working in business, teaching in schools, leading a youth group, pastoring a church or working as a dentist, doctor or computer programmer. Isn’t that what Jesus did? He invested in a few disciples, and through those original disciples, the world today is still being impacted. We can’t feed the world, but we can feed and educate ONE child, restore hope for ONE family and God CAN break generational chains one family at a time.

There are countless children waiting for a Samuel’s Fund sponsorship that could change their lives and the lives of others for generations. Please contact Victoria Orr, vorr@stchm.org or call 361.994.0940 for more information.

Preparing to Face the Growing Need

Celebrating 70 Years of Ministry/Week of Hope – Sharing Hope Through ...
Scroll to top