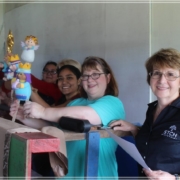 What gift do you think the wise men brought to Jesus? A chupon! A baby bottle was the eager answer.

Sharing the good news of Jesus’ birth, our mission team traveled to Costa Rica in December. We turned an old table on its side, and draped it with a blanket, creating an improvised puppet stage. Crouched behind, team members held stick puppets while a narrator told the story of angels, and shepherds and wise men, and best of all, a baby! The children responded to questions in their language. “Jesus was born in a “corral” and laid in the dry grass in a pesebre, surrounded by stinky, noisy pigs, chickens and a rooster!” The children could visualize a baby born in the midst of those surroundings. After all, the surroundings in which they lived were not so very different from this stable.

The Christmas story continued. The wise men were very rich and they brought gifts to the baby Jesus. What do you think they brought? One little boy shot his hand straight up and said for all to hear,

The story ended with the question, “Do you know that Jesus is still looking for a place to live?” Perplexed looks responded. “That’s right. Jesus wants to live in our hearts, in my heart and in your heart. Can you hear him knocking right now? Do you want to invite him to come in?”

God chose to announce his arrival in terms that even a poor, uneducated, isolated child could understand. Hearts open, there was nothing in their lives to distract, to compete with the amazing angelic announcement, “This day, a Savior is born and lies in a manger!”

As we closed, the children joined in singing a carol about Jesus birth—a song translated into many languages around the world, “Noche de paz, noche de amor” (Silent night, holy night).