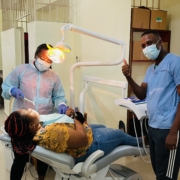 Every ministry faces similar challenges. From advocacy organizations that support children, youth and the homeless to nonprofits that provide drug and alcohol programs. Every leadership team grapples with the question: How do we invest our limited resources to meet the greatest needs for the greatest number of people?

STCH MINISTRIES INTERNATIONAL began work in the Dominican Republic with a similar question, “From an eternal perspective, where do we focus our teaspoon of resources for the ocean of need surrounding us?”

Our mission statement seeded the answer. “Honoring God, helping children and families with His love and truth and enabling others to join us.” To accomplish this mission, a unique
sponsorship program would provide:
• Eternal hope and spiritual development through faith in Christ
• Opportunity for sponsors to personally invest influence and resources in these lives
• Education to break shackles of generational poverty
• Support to develop as Christian leaders in their own culture

The Samuel’s Fund sponsorship identified disadvantaged children with potential, ages four through high school. It was named after the biblical character of Samuel, a great leader and influencer in the nation of Israel. When God called him as a child, Samuel answered, “Speak, Lord, your servant is listening.” He was only a child, yet his training had begun. In the Dominican Republic, the Samuel’s Fund program grew to benefit more than 400 children with this opportunity.

As children matured and graduated from high school, the creation of the Christian Leadership Educational Project (CLEP) extended the development of “Christian leaders in their own culture” through college. Those who demonstrated leadership potential in their church or Christian ministry would be eligible for a scholarship.

Jose Alberto Regalado is one of these young adults. Jose was born in Monte Plata, the youngest of four siblings. His father abandoned the family before he was born, leaving the family in abject poverty. At the age of 10, his mother died. Through the care of his Heavenly Father (whom he did not know at the time), he was chosen to live with Ramon and Juana Prensa, founders of the Monte Plata Children’s Home. Jose recounted, “They treated me as a son, and guided me all of my life. I learned everything about life from them—how to eat at a table, take care of my clothes, work and study, drive a car—everything!”

Dominican law requires a child to move out of an orphanage at age 18. Although he was still in school, Jose moved out. He worked at the school, helping out in their small dental clinic until he graduated. This experience led him to pursue training as a dental technician, traveling every day to Santo Domingo. However, the length and cost of the one-way, three-hour trip, plus poor job opportunities for a technician were discouraging.

Through a series of God-planned circumstances, Jose began to help STCH Ministries summer groups. He met Christians with generous hearts, and soon he became a CLEP scholarship recipient. The sponsorship enabled him to move to Santo Domingo and enroll in dental school.

In addition to the financial help, the CLEP sponsorship provided much needed support. Jose’s life has not been easy. He identified the lack of a mother’s love as an aching void in his heart. It has contributed to some serious mistakes as he searched for a substitute. Along with his sponsors, STCH Ministries staff stood by him with loving counsel and support. In addition, due to the circumstances of his birth, Jose lacks required Dominican government recognition (similar to a social security number) necessary for licensure when he graduates. With faith that God will intervene, prayer and work continue, enabling Jose to focus on God’s purpose for his life—to serve others through his skills as a dentist.

Vladimir Minier was always fascinated by numbers and the topic of finances. As a child, he lived in one of the poorest sections of Villa Mella. He suffered from depression and rarely spoke or smiled. Overweight and painfully shy, Vladimir received regular abuse from peers. When he was thirteen-years-old, a Christian teacher at school told the story of Christ dying for our sins. “Come to me,” she quoted. “Put your burdens on me.” She stated with assurance that Jesus could change lives. Vladimir bowed his head over his desk and committed his life to Christ. Life became a little brighter. He was not alone anymore.

When a church opened in his neighborhood, he began to attend faithfully. Attending grew to assisting, then teaching. He led the singing and joined the drama group. Diosmary, a part time STCH Ministries tutor, told him about the CLEP program and invited him to apply for a scholarship. Vladimir was accepted, and soon he enrolled in a private university with a major in the area of finances.

In October 2021 he will graduate as a Licensed Financial Advisor. He is presently working in a bank as he waits to apply for a government-funded master’s program in France. Long-term, his goals include owning his own firm, consulting, giving back to others through guidance in money management. Vladimir credits the CLEP scholarship with providing many opportunities that have benefited him, saying, “It gave me hope, and helped me to reach seemingly impossible goals in the university.”

As Vladimir also assisted with summer teams, he reported, “I was inspired by their noble hearts, how they sacrificed themselves to help others. I want to do that through my career in the future.”

Carlos Cruz lived an uneventful life in Puerto Plata until at eight years of age, his world turned gray and the light of hope was extinguished from his soft brown eyes. His dad left and remarried. Lack of stability and financial needs became a daily reality. Carlos disconnected emotionally and retreated to books and videos. Sometime later his mother also left for Italy.

Carlos came to faith through his involvement in a church during his early teens. His despondency coupled with his habit of reading attracted him first to Ecclesiastes and later drew him to the book of Proverbs. He memorized significant portions, saying, “Proverbs helped me to make many good decisions since I didn’t have anyone else to guide me.”

Carlos moved to Santo Domingo after high school, hoping to find a way to enroll in the university. He lived with grandparents for a short while and began to serve in his uncle’s church in the impoverished neighborhood of Brisas del Este. There he learned about the CLEP program, applied and was accepted. While Carlos studied construction engineering, he also dedicated many hours to helping other Samuel’s Fund children as he helped to lead mission teams. COVID disruptions pushed his graduation to spring 2022. His goal is to remodel homes and flip them for a profit. He will continue serving with STCH Ministries and in the Brisas del Este church.

Dark-haired and strikingly beautiful, Jeffy Ariza plays clarinet in the IBQ praise band. Although she seems too young, she will finish her studies in medicine this year as a CLEP scholarship recipient. After serving two years of residency she will continue to specialize as a pediatrician. Jeffy is passionate about her goals, explaining, “I want to be a different kind of doctor, compassionate, serving God and my community rather than making money.”

Perhaps her passion can be traced back to her early years with five siblings. Jeffy remembers poverty and hunger, lack of school supplies and uniforms for school attendance and a father who struggled with rage. She grieved to see her younger siblings and her mother suffer. Her health was affected by the stress. She struggled with depression and developed serious gastrointestinal issues.

She accepted Christ at 11 years of age along with her mother, through the outreach of the IBQ church. Later, they were chosen for a Samuel’s Fund sponsorship, and their home stabilized. Jeffy’s impossible dream to become a doctor evolved into a reality through a CLEP scholarship. Jeffy cannot count the number of ways that the scholarships have benefited her and her family—tuition and school supplies, food during difficult times, medical care and medicines, tutoring and even a laptop for their studies.

Although life has not been easy, Jeffy believes that God allowed everything for a purpose. Reflecting over the past, Jeffy concluded, “It was a test, like gold being refined, and I was able to grow.”

Nemesis Chalas grimaced a bit as she shared that her greatest obstacle is her impatience. As she neared graduation from university, impatiently praying for a job, she suffered hours of overwhelming anxiety and frustration. “Now I see that God had something specific in mind for me, in His time, at the right time.” Today, she has a great job with the Department of Education.

Nemesis’ life shares a familiar pattern in the Dominican Republic—a broken home, lack of resources to continue her education. She recounted that in spite of impoverished circumstances, learning was always easy for her, and she finished high school with honors. She accepted Christ at 14 years of age. When she was 16, a paralyzing fear of death motivated her to pray, “If you let me live, I promise to serve you.”

A visionary and ambitious young lady, Nemesis plans to have her own business in the future as an event planner—lights, sound, food, music and decorations. She has already begun planning smaller celebrations like birthday parties. Inspired by the work she did with the summer mission teams, she plans to use these opportunities to share her faith and be a blessing to others.

Keren Ramirez lives in La Romana. As the daughter of a pastor in a very needy area, economic deprivation has always been a huge obstacle, both personally and for the church. Keren shared, “God always sent angels who donated at just the right time for our greatest needs. One time my father checked his bank to see whether there was enough for our immediate need and discovered he had a large balance. Although he queried everyone, he never discovered who made that deposit.”

Those experiences made an indelible impression and grew her faith. With no means to pay for a university education, she knows God provided the CLEP scholarship. Keren will graduate in November 2021 as a lab technician. Her experiences working with mission teams have inspired her. Although their economic circumstances are very different, she learned that Americans have the same faith as she does. “They sacrifice to serve and give their resources. We serve God together and have faith in the same God, and He uses all of us to accomplish His purpose,” she reflected.

In 2006 STCH Ministries expanded internationally, responding to God’s call to serve beyond the South Texas region. We began with faith and a lot of questions. Where to start? How to invest in keeping with the calling God had given STCH Ministries? What is the best way to invest for long-term impact and eternal benefits?

The success of the sponsorship and university scholarship program (CLEP) is demonstrated in the lives of these young people and many more. Doctor, dentist, financial advisor, event planner, construction engineer and more—productive citizens, able to bless their families, committed to serving Christ as leaders in their own culture. The credit for the vision, and the glory for all that has been accomplished belongs solely to the great God we are privileged to serve through STCH Ministries.

Healing for the Brokenhearted
Scroll to top