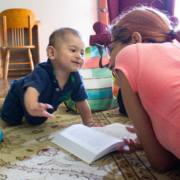 Debbie and her youngest son, Jonathan, pictured in June 2017.

Little Jonathan is learning the ways of God while living at Homes for Families. He has learned to hold his hands together during meal-time prayers, including an enthusiastic “Amen!” at the end. During a recent worship service at church, Jonathan saw another mom in care raising her hand in worship and he followed suit. Those around him smiled at the precious sight of a two year old, hand uplifted and seeming to be absorbed in the song of praise.

Even if he does not understand it now, Jonathan is watching and learning from his surroundings. And thanks to STCH Ministries, he is getting to know his Heavenly Father.

There and Back Again