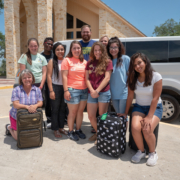 On a blazing hot afternoon in early June, four adults and six young people gathered in front of the chapel on Boothe Campus for a word of prayer, and then piled into a passenger van to embark on the adventure of a lifetime. It was not a vacation nor a senior trip that lit up their eyes with excitement. In fact, they had a great deal of work ahead of them in weather even hotter than the Texas sun. Instead, their enthusiasm came from their purpose: this group was on a mission to share the love of Christ with children in the Dominican Republic.

At STCH Ministries, there is a special kind of synergy that results when two of our ministries join forces. In this case, Homes for Children put together a team to go on a week-long mission trip with our International ministry.  The group consisted of three staff members and six young people from Boothe Campus, accompanied by Amanda Longoria, Associate Director of International. The trip would place the younger members in a unique reversal of roles: traveling from the children’s home where they live to a children’s home in a foreign land where they would be the ones ministering. Many other illuminating experiences lay in store as well, but the first step (and perhaps an adventure all its own) was to get to the Dominican Republic.

“Most of our students had never flown on a plane before, so it was very interesting to share that experience with them. They learned about airport security and how to board a plane,” said Joel Bowden, Director of Student Ministries. He also reported that they “learned where the ‘barf bags’ located” on the plane, although further details were not provided.

The team stayed at Iglesia Bautista Quisqueyana (IBQ), the primary church partner of STCH Ministries in the Dominican Republic. Once on the ground, the “new” factor continued through both cultural and ministry activities. 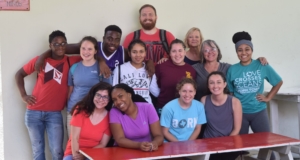 “It was a new experience for all of them,” said Patty Kinnamon, Commissary Supervisor at Boothe Campus. “Some had never hung drywall and used a screw gun, or measured, cut, and installed insulation. They had never seen beautiful water at the beach—only gulf water.”

Amanda recalled the feelings of trepidation that some of the students expressed during devotion. “They didn’t know the language. They were nervous, inexperienced, and doubtful. The leaders had to remind them that just being here in the DR was already a step in the right direction, a step of faith.”

Inexperience did not inhibit the team’s work ethic, however, and they quickly dove into construction projects. Using funds they had raised back in Texas, they rebuilt the walls and roof of a home where a Samuel’s Fund child lives. The team also demolished another home that was slated to be rebuilt by a subsequent mission team. The solid, tangible results of the construction projects gave the team a sense of accomplishment.

“The construction was my because we all worked as a team and played our part,” said Carrie, one of the teens on the trip.

“We were all astonished at how such a little group could accomplish so much!” said Amanda.

Once the sawdust settled, the team transitioned into other ministry activities that gave them a chance to build relationships with the people around them. 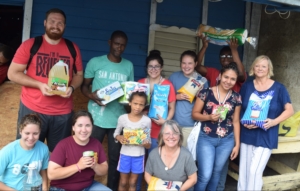 “We had the joy of shopping with Texas Baptist Hunger Offering funds and delivering basic items to two families of Samuel’s Fund children who were struggling with health and financial issues,” said Sheila Backen, a from Boothe Campus. “The joy in their eyes needed no translation. It was so beneficial for our students to see how many more resources they have to use in their lives than the families in these homes.  It was a stark contrast that I hope built a permanent sense of gratitude in their lives.”

The group also enjoyed having dinner with the families of local church members. Breaking bread together in the cool of the evening, the teens from Texas experienced fellowship in its most basic form.

“This was a precious time that helped us all to understand that Christians truly are united in one body, regardless of nationality or language,” said Sheila.

The next leg of the team’s adventure began with a short road trip across the Dominican countryside. IBQ, the church where the team had their home base, is located on the outskirts of Santo Domingo. This bustling capital city has a population equal to Austin, Texas, in one eighth of the geographic area. The team’s destination was Monte Plata, a rural community about the size of Victoria, Texas. Nestled in deep green hills, this sleepy town is the location of the Casa Monte Plata Children’s Home, a long-time STCH Ministries partner. 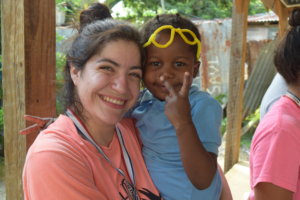 Casa Monte Plata operates very much like STCH Ministries Homes for Children, with a campus made up of individual cottages. Each cottage has houseparents who take care of the children in a family setting. The buildings are painted in brighter colors than their Texas counterparts, and the garden is filled with tropical foliage instead of towering oak trees, but the Dominican children’s home radiates the same sense of love and security that many generations of children have found at STCH Ministries.

The young people on the team found it easy to connect with the residents, perhaps aided by a sense of shared experience that crossed cultural boundaries.

“It was a real joy to see the love they extended to the children,” said Sheila. “DeRay even taught some Dominican children to dance! The language barrier presented no problem for our teens, as the love of God they shared with each person they met was easily understood in any language.”

There in the Dominican countryside, where the residents from one children’s home became the helpers and encouragers to the children in another, the circle of ministry was complete. The served became the servants, and the love of Christ overflowed from one life to another. As is often the case, the ones doing the ministry found themselves affected just as much the ones to whom they ministered.

“It humbled me a lot to be able to go on this trip,” said Mary, who graduated from high school shortly before the trip. “I had plans to go three years ago, but it didn’t work out. I see now that this was God’s timing. It was very humbling for me to see how Dominicans live, and their love and zeal for God. Also, it refreshed me spiritually and mentally.”

Returning to IBQ, the team concluded their trip with a mixture of physical weariness and spiritual vitality. 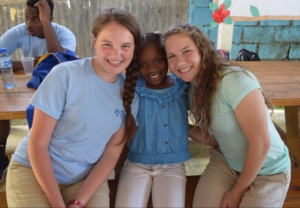 “I always feel refreshed and encouraged after spending a week at IBQ,” said Joel. “Not because it is a restful week—I am physically exhausted at the end of it—but refreshed because of the community of believers, a community that has fully bought into the idea of discipleship.”

As Director of Student Ministries, Joel was keenly aware of the positive influence this environment had on the teens from Boothe Campus.

“I am also refreshed by the of young people that serve in the church and serve the people in their community simply because that’s what God calls them to do,” he said, “and I love the example it sets for our students.”

At the end of the week-long mission trip, the group of travelers returned to Boothe Campus brimming with memories, new experiences, and a fresh perspective on the place they call home.

Sheila summarized the trials and triumphs of their adventure in one brief statement: “There was joy and flexibility throughout the trip. Plans changed. Numbers changed. Strength varied from day to day. But everyone rose to the challenges, and, when all the pieces fell into place, God made the trip picture-perfect.”

Raising Up the Next Generation
Scroll to top