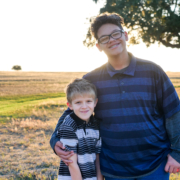 In June of 2018, two brothers were placed on the Boothe Campus because their grandmother, who was their caregiver, was experiencing some health issues. They said goodbye to their family, friends and the life they knew and moved to a place where they knew no one and had no expectations of what was to come. “They were quiet and a little uneasy,” their housemom shared. “You could tell they wanted to interact, but they were very cautious.” What the brothers did not know was that there were people praying for them, for their family and for restoration and healing to begin.

“Reconciliation and reunification with family is the hope for all the children that come to STCH Ministries Homes for Children,” Greg Huskey, Vice President of Homes for Children stated. Specific prayers that God will provide healing, restoration and peace among their family or that God will open the door for them to become part of a new family are a part of everyday life. For the two brothers, C.J. who is 14 and Jonathan who is 9, it would take a year and a half for their family to be restored and for the boys to be reunited with their family.

Their story started four years before they came to Homes for Children, when their grandparents, Marsha and David, became caregivers for the boys, due to some unforeseen circumstances within their family. The grandparents were blessed to be able to take the boys in and to start caring for them. In 2016, Marsha experienced a severe car wreck that caused major medical issues. A few months later, David had surgery for his kidneys, and started dialysis treatments. Marsha and David prayed for a way to continue caring for the boys through this difficult time.

Marsha and David started attending a local church a few years before taking the boys into their care. They did not understand why God was calling them to be at that specific church, but they knew when they walked in that God wanted them there for a reason. As medical issues continued to worsen, members of the church shared with them about STCH Ministries Homes for Children. Marsha saw it as an answer to their prayers. “We didn’t know God’s plan when we started at the church, but He did,” Marsha recalled. “He knew we would need the support of the church, and STCH Ministries.”

For months, Marsha and David prayed about God’s plan for the boys. They felt God telling them that the Boothe Campus was where the boys were supposed to be, but that did not make the decision any easier. “When we took them there and left them there, that was the hardest thing I’ve ever done in my life,” David remembered. Tears filled both the grandparents’ eyes and the boys’ eyes as they hugged and said their goodbyes. This would be the start of restoration and healing for all of them.

As the boys settled into their new way of life they started to see the positives. They saw God moving in their lives as they interacted with the other children on campus and opened up to their new houseparents. Church is a major part of life at STCH Ministries and the boys enjoyed going to church with their houseparents. C.J. loved the youth group and started to see his relationship with God differently. “I have grown closer to God and seen Him move in many different ways,” C.J. stated.

As their time on the Boothe Campus continued, the relationship between the brothers grew as they remained each other’s constant. The boys also continued to strengthen their relationship with their houseparents and the other children in their cottage. Their houseparents, Sheila and Terry Backen, worked with the boys and helped in the healing process. “The Backens are angels!” Marsha exclaimed, “they were wonderful with the boys and we see such a difference in them.”

Becoming more independent is something that children on the Boothe Campus learn to do. They learn to take pride in their chores, to help with meal preparation, to take care of themselves and to be more respectful. The daily chores make them take ownership of the cottage they live in and teach them to be positive even when doing something they may not want to do.

Counseling is another huge aspect of the Homes for Children ministry. Many children come to the Boothe Campus in need of someone to help them and talk with them as healing begins. The child’s caseworker also plays a vital role in the healing process. While the brothers were healing on the campus their grandparents were healing at home. Marsha and David received the medical help they needed to better interact with the boys. At the same time communication began to improve within their family.

Marsha and David prayed when they placed the brothers that it would not be a permanent thing. They wanted the boys to be home with them when the timing was right. When approved, children in care are able to go on home visits throughout the year. C.J. and Jonathan were allowed to go home with their grandparents on some weekends and holidays. Every time they would return to campus Jonathan would ask his grandparents, “When will be the time that we get to stay at home with you?” This broke their grandparents’ hearts because they wanted that time to be every time.

They could feel God working and felt that Christmas of 2019 would be that time. Working with the caseworkers and other STCH Ministries’ staff, they prepared for the reunification of their family. The boys reacted to the news with both excitement and sadness. Going home meant leaving their friends and their houseparents on the Boothe Campus. “Children leaving is hard every time, but it is a little easier when you know it is in God’s timing,” their housemom shared. This was God’s timing.

A few days before Christmas, David came to Boothe Campus and helped pack the boy’s stuff up. They were going home and staying there. Since being home, Marsha and David have seen a difference in the way the boys interact, not just with them, but with other adults in their lives. They are more respectful and more willing to help out around the house. Marsha and David plan to lean on support from other family members. The family is currently looking for a church with a strong youth group to help C.J. and Jonathan continue to grow with God. The boys are also able to continue seeing a STCH Ministries’ counselor for help with the transition. God answered the prayers of many when He completed the reunification of this family.

For more information on STCH Ministries Homes for Children go to https://www.stchm.org/homes-for-children/.

We Have Good News!
Scroll to top