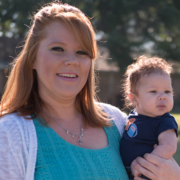 When 28-year-old Ashley Kaufman discovered she was pregnant in 2016, she was devastated. She and her two young sons had recently escaped an abusive marriage, but not before Ashley lost custody of her daughter from a previous relationship. Heartbroken and afraid, Ashley struggled to think about bringing another child into her world.

“My life was in shambles,” Ashley said. “I hated myself and couldn’t understand why I kept making bad decisions. I started thinking about an abortion. I thought it would make everything easier.”

Growing up in Santa Rosa, California, Ashley had never known stability. Her father was a musician and she, her mother, and an older half-sister often traveled with him. She was only seven when her parents divorced.

“My mom was addicted to drugs, and she often left my sister and me alone for two weeks at a time,” Ashley recalls. “I felt so scared and alone. I also got sexually molested by a relative during one of those times.”

During high school, Ashley left home and eventually dropped out of school. She became pregnant when she was nineteen and had a son, Jaden. She then met another man and within a year gave birth to Alexis, her daughter. After five years in that relationship, Ashley returned to Jaden’s father and had a third child, Adrian. Ashley began to sense God’s conviction and started going to church on her own.

“I wanted so badly to try and make my marriage work so my sons could be with their father,” Ashley shared. “I thought I could fix him, but he never stopped his abusive behavior.”

One Sunday morning after leaving her husband, Ashley went to Bear Creek Baptist Church in Katy, Texas. She became so upset during the service that she ran out and asked if there was someone who could help her. She was told that STCH Ministries offered counseling services at Bear Creek and was soon able to talk with a counselor.

“What I really wanted was for someone to tell me abortion was okay…that it would be the best choice for me. Instead, the counselor told me abortion isn’t okay and if I went through with it, I would feel more pain in the end than if I chose to have this precious baby God was giving me.”

The counselor also told Ashley about another program of STCH Ministries called Homes for Families, a place that could give her the support she needed to face her pregnancy as she worked toward a more promising future for herself and her children.

Although leery from her experiences of staying in shelters, Ashley finally made the phone call. Theresa Klacman, program coordinator at Homes for Families, was ready and waiting.

“The counselors let me know that this was a young woman contemplating abortion, which is something really close to my heart,” Klacman said. “I had an abortion when I was seventeen, and I know that you never ever forget the experience. Ashley shared about her situation and we talked about the power and forgiveness of God, and His hope and redemption. I believed Ashley really wanted this child but was overwhelmed by all the obstacles. She needed someone to tell her that she had options, and that she wouldn’t be in this alone.”

Ashley and her two sons arrived at Homes for Families in Goliad, Texas, on Valentine’s Day 2017. She was given a vase of flowers with a card that said, I love you. From God. “It was like God was saying to me, ‘You can breathe now. It’s okay.’”

Ashley poured herself into Phase 1 of the program, a time devoted to the restoration of body, mind, and spirit and developing a more intimate relationship with God. Four months later, Isaiah was born, bringing a new peace Ashley had never known.

“I am so glad I didn’t go through with the abortion and that I have Isaiah!” Ashley exclaimed through tears of joy. “Being here has been the best experience of my life. The hardest part was facing myself and the issues inside, like pride and unforgiveness. The staff here have held my hand and guided me. They taught me what it takes to have a personal relationship with God, and how to truly lay down my life for Jesus. I knew it was time. I just hadn’t known how.”

Ashley’s resident coordinator has witnessed an amazing transformation in her.

“Ashley is a dedicated mother who loves her children more than herself. She takes every situation to God in prayer and has attained a wonderful resilience. I believe one day God will use her strong personality and joyful spirit to lead others.”

Ashley is so grateful for all God is doing in her family. Jaden is in fourth grade and loving his new school. Two-year-old Adrian is cared for at the Homes for Families onsite childcare, and baby Isaiah stays with his mom during the day. Soon Ashley will begin taking classes that will prepare her to enroll in college, where she plans to study nursing.

“STCH Ministries has helped create a foundation for the rest of my life,” Ashley said, “and I know two things for sure. Every single day I am here, I am in God’s will, and every day He is healing my brokenness.”

If you would like to learn more about the Homes for Families ministry, visit www.STCHM.org/HFF.